Capital of the North

Unofficially dubbed the Capital of the North, Manchester is known for its influence on industry and music, as well as its world-renowned connection to sports.

Do your shopping at Chatsworth House and Manchester Art Gallery. Step off the beaten path and head to Walls of Chester and The Crystal Maze LIVE Experience, Manchester. Change things up with these side-trips from Manchester: Chester Cathedral (in Chester), Lakeland Motor Museum (in Backbarrow) and Cheshire Oaks Designer Outlet (in Ellesmere Port). The adventure continues: delve into the distant past at York City Walls, appreciate the extensive heritage of Steep Hill, get lost in a book at The John Rylands Library, and take a leisurely stroll along Llandudno Pier.

Plan trip to Manchester with our itinerary maker to find out where to go and what to do.

Things to do in Manchester

Discover out-of-the-way places like Saatchi Gallery and Notting Hill. Head to The Underdog and Regent Streetfor some retail therapy. And it doesn't end there: have some family-friendly fun at The Crystal Maze LIVE Experience London, stroll the grounds of Highgate Cemetery, snap pictures at Millennium Bridge, and see the interesting displays at Emirates Stadium Tour and Museum.

For ratings, more things to do, reviews, and tourist information, you can read our London day trip site.

Take a train from Manchester to London in 2.5 hours. Alternatively, you can fly; or drive. In December in London, expect temperatures between 11°C during the day and 4°C at night. Finish your sightseeing early on the 13th (Sun) so you can travel to Amsterdam.
more less

You'll discover tucked-away gems like Brouwerij 't IJ and Hermitage Amsterdam. Head to De 9 Straatjes and Royal Flora Hollandfor some retail therapy. You'll find plenty of places to visit near Amsterdam: Hoge Veluwe National Park (in Hoenderloo), Nationaal Park Veluwezoom (in Rheden) and Strand Egmond aan Zee (in Egmond aan Zee). And it doesn't end there: explore the activities along The Amstel, examine the collection at Micropia, take in the spiritual surroundings of Portuguese Synagogue, and indulge in some personalized pampering at some of the best spas.

To see more things to do, photos, other places to visit, and tourist information, read Amsterdam tour app.

Step off the beaten path and head to WineBubbles and La Cite fleurie. Head to Marche Dauphine and Deleansfor plenty of shopping. Change things up with these side-trips from Paris: Cathedrale Saint-Pierre-et-Saint-Paul (in Troyes) and Veuve Clicquot-Ponsardin (in Reims). There's much more to do: wander the streets of Rue Denoyez, don't miss a visit to Place Vendome, visit 1st Arrondissement, and get to know the resident critters at Jardin des Plantes.

To find other places to visit, where to stay, maps, and other tourist information, refer to the Paris trip builder site.

You can take a train from Amsterdam to Paris in 3.5 hours. Other options are to do a combination of train and flight; or drive. December in Paris sees daily highs of 9°C and lows of 3°C at night. On the 27th (Sun), wrap the sightseeing up by early afternoon so you can travel to Berlin.
more less 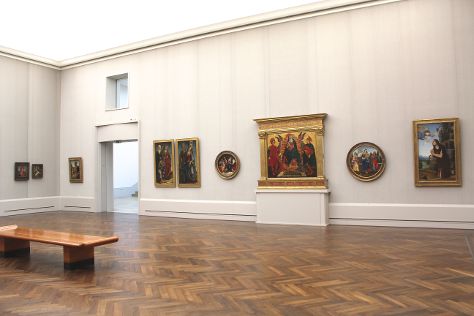 Athens of the Spree

The country's capital and largest city, Berlin is a diverse urban center boasting a lively nightlife and countless things to do.

For shopping fun, head to Hauptbahnhof Leipzig or Die Hackeschen Hoefe. You'll discover tucked-away gems like Palace of Tears and German Museum of Technology. When in Berlin, make a side trip to see Frauenkirche Dresden in Dresden, approximately Dresden away. The adventure continues: don't miss a visit to Gendarmenmarkt, buy something for everyone on your list at Mall of Berlin, get your game on at EXIT Game, and stroll around Treptower Park.

For more things to do, other places to visit, and tourist information, you can read our Berlin trip maker.

You can do a combination of train and flight from Paris to Berlin in 5 hours. Other options are to fly; or drive. Wrap up your sightseeing on the 3rd (Sun) early enough to travel to Frankfurt.
more less

Things to do in Berlin

A global center of finance and transportation, Frankfurt is perhaps best known for its futuristic cityscape.

You'll explore the less-touristy side of things at Main-Taunus Zentrum and ABACI. Do your shopping at Galeria Kaufhof Frankfurt An der Hauptwache and Schillermarkt. And it doesn't end there: browse the different shops at Bauernmarkt Konstablerwache, indulge in some personalized pampering at some of the best spas, examine the collection at Dialogmuseum Frankfurt, and enjoy breathtaking views from Goetheturm.

For ratings, maps, photos, and other tourist information, go to the Frankfurt online route planner.

Traveling by flight from Berlin to Frankfurt takes 3 hours. Alternatively, you can do a combination of flight, tram, and train; or drive. In January in Frankfurt, expect temperatures between 5°C during the day and 0°C at night. Wrap up your sightseeing on the 10th (Sun) to allow time to take a train to Munich.
more less

Things to do in Frankfurt

Village of a Million People

Often described as the city of laptops and lederhosen, Munich is an international center of business, engineering, research, and medicine that still maintains a rich cultural heritage and age-old traditions.

To find ratings, photos, more things to do, and more tourist information, refer to the Munich journey planner.

Take a train from Frankfurt to Munich in 3.5 hours. Alternatively, you can do a combination of flight and bus; or drive. Traveling from Frankfurt in January, you can expect nighttime temperatures to be slightly colder in Munich, with lows of -3°C. On the 16th (Sat), wrap the sightseeing up by early afternoon so you can travel back home.
more less

Things to do in Munich