Deepen your sense of the past at sights like Eiffel Tower and Basilique du Sacre-Coeur de Montmartre. Shop till you drop at Le Marais and Saint Germain des Pres Quarter. Explore Paris' surroundings by going to Chartres Cathedral (in Chartres), La Hotte du Diable (in Coincy) and Palace of Versailles (in Versailles). There's lots more to do: take in the architecture and atmosphere at Cathédrale Notre-Dame de Paris, step off the mainland to explore Ile Saint-Louis, explore the world behind art at Louvre Museum, and get engrossed in the history at Chateau de Fontainebleau.

To find reviews, more things to do, and more tourist information, use the Paris online trip itinerary maker.

If you are flying in from Hungary, the closest major aiports are Paris-Orly Airport, Charles de Gaulle International Airport and Paris Beauvais Tillé Airport. April in Paris sees daily highs of 18°C and lows of 6°C at night. Finish your sightseeing early on the 13th (Mon) so you can drive to Honfleur.
more less 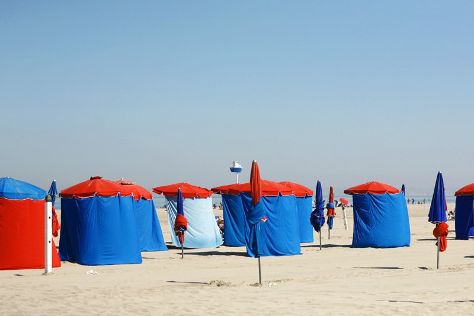 Honfleur is a town surrounding a beautiful little 17th-century harbor in Lower Normandy.

Start off your visit on the 14th (Tue): contemplate the long history of Eglise Saint-Leonard, look for all kinds of wild species at Naturospace, and then kick back and relax at Deauville Beach. On your second day here, explore the world behind art at Musee Maison de L'Armateur, stop by Loho Le Local Shop, then see the interesting displays at Appartement Temoin, then contemplate in the serene atmosphere at Cathedrale Saint-Pierre de Lisieux, and finally contemplate in the serene atmosphere at Saint Catherine's Catholic Church.

You can drive from Paris to Honfleur in 2 hours. Other options are to take a bus; or do a combination of subway and bus. Expect a daytime high around 16°C in April, and nighttime lows around 6°C. Wrap up your sightseeing on the 15th (Wed) early enough to travel to Barneville-Carteret.
more less

Things to do in Honfleur

Situated across from the Channel Islands, Barneville-Carteret is a seaside resort that assures you of its excellent water quality due to its recognition as a Blue Flag beach--a designation awarded to seaside areas adhering to specific environmental standards.

Start off your visit on the 16th (Thu): learn about all things military at Marcouf44, then view the masterpieces at Aces High Gallery, then step into the grandiose world of Chateau Fort de Pirou, and finally look for all kinds of wild species at Dunes d'Hattainville. Get ready for a full day of sightseeing on the 17th (Fri): stroll the grounds of German War Cemetery and then kick back and relax at Plage de Vauville.

You can plan Barneville-Carteret trip in no time by asking Inspirock to help create your itinerary.

Things to do in Barneville-Carteret 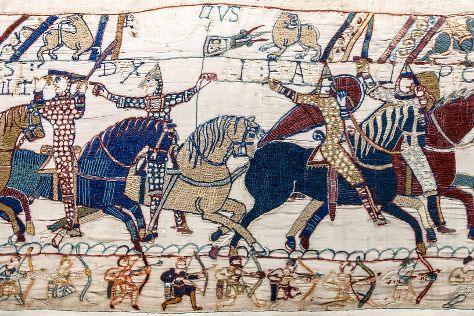 Most travelers take a trip to Bayeux to see the famed tapestry depicting the legendary Norman Conquest from the 11th century.

Kick off your visit on the 18th (Sat): look for gifts at Les Vergers de Ducy, pause for some serene contemplation at Abbaye Saint-Martin de Mondaye, then stroll the grounds of Bayeux War Cemetery, then get engrossed in the history at Musee Baron Gerard, and finally admire the landmark architecture of Cathedrale Notre-Dame. On the next day, don't miss a visit to Atelier Galerie Ludovic Grand-Guillot, explore the world behind art at Musee de la Tapisserie de Bayeux, then stroll the grounds of Normandy American Cemetery, and finally witness the site of a historic battle at Omaha Beach.

To see photos, reviews, ratings, and other tourist information, refer to the Bayeux day trip app.

Traveling by car from Barneville-Carteret to Bayeux takes 1.5 hours. The time zone difference moving from Greenwich Mean Time (GMT) to Central European Standard Time (CET) is 1 hour. Expect slightly colder evenings in Bayeux when traveling from Barneville-Carteret in April, with lows around 5°C. Wrap up your sightseeing by early afternoon on the 20th (Mon) to allow time for the car ride back home.
more less

Things to do in Bayeux