The Birthplace of Democracy

One of the world's most ancient cities, Athens remains Europe's undisputed historical and cultural capital.

On the 23rd (Fri), take in the architecture and atmosphere at Agios Nikolaos Church, appreciate the history behind Submarine Monument, then see the interesting displays at Floating Naval Museum Battleship Averof, then go for a stroll along the water at Flisvos Marina, and finally see where the action happens at Panathenaic Stadium.

For traveler tips, more things to do, where to stay, and more tourist information, go to the Athens day trip planning site.

Things to do in Athens 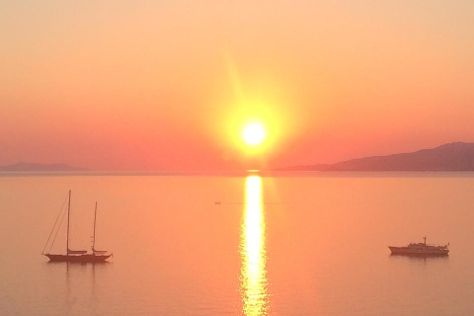 A holiday in Mykonos Town offers a chance to relax on picturesque beaches and explore a labyrinth of charming streets lined with traditional white houses.

You'll explore the less-touristy side of things at Rarity Gallery and Kalo Livadi Beach. There's still lots to do: kick back and relax at Agios Sostis Beach, tour the pleasant surroundings at Kapari Beach, take in the architecture and atmosphere at Agios Nikolakis Church, and go for a stroll along the water at Old Port.

Do a combination of subway and flight from Athens to Mykonos Town in 2.5 hours. Alternatively, you can ride a ferry; or do a combination of flight, taxi, and ferry. Traveling from Athens in August, you will find days in Mykonos Town are a bit cooler (33°C), and nights are about the same (27°C). Wrap up your sightseeing on the 27th (Tue) to allow time to drive to Oia.
more less

Things to do in Mykonos Town

Every day hundreds of visitors come to Oia just to experience its sunsets.

Kick off your visit on the 28th (Wed): discover the deep blue sea with a scuba or snorkeling tour and then stop by Atlantis Books E.E.. On the 29th (Thu), you'll have a packed day of sightseeing: step into the grandiose world of Byzantine Castle Ruins, explore the galleries of Mnemossyne Gallery, learn about winemaking at Domaine Sigalas, then pause for some serene contemplation at Agios Georgios Church, then view the masterpieces at Oia Treasures Art Gallery, and finally pause for some serene contemplation at Ekklisia Panagia Platsani.

For more things to do, reviews, where to stay, and other tourist information, read Oia journey planner.

Traveling by car from Mykonos Town to Oia takes 6.5 hours. In August, daytime highs in Oia are 36°C, while nighttime lows are 28°C. Finish up your sightseeing early on the 29th (Thu) so you can go by car to Megalochori.
more less

Things to do in Oia 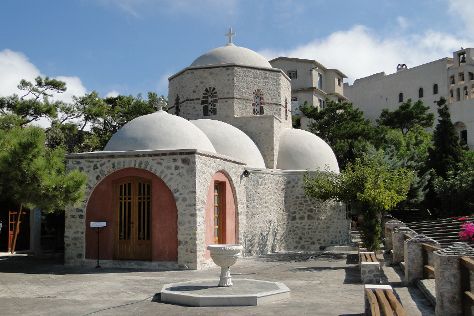 ©
Start off your visit on the 30th (Fri): stroll through Vlychada Beach, then step into the grandiose world of Castelli of Pyrgos, then browse the exhibits of Art Space, and finally do a tasting at Venetsanos Winery. Keep things going the next day: see the interesting displays at Tomato Industrial Museum, examine the collection at Monastery of Profitis Ilias, and then examine the collection at Cultural Village.

To find ratings, more things to do, reviews, and other tourist information, use the Megalochori trip itinerary planner.

Drive from Oia to Megalochori in an hour. In August, plan for daily highs up to 36°C, and evening lows to 28°C. Wrap up your sightseeing by early afternoon on the 1st (Sun) to allow enough time to travel back home.
more less

Things to do in Megalochori