Once the most important harbor in the Mediterranean Sea, Genoa has a long history as a rich and powerful trade center in northern Italy.

Go for a jaunt from Genoa to Sestri Levante to see Baia del Silenzio about 52 minutes away. And it doesn't end there: observe the fascinating underwater world at Aquarium of Genoa, get to know the fascinating history of Passeggiata Anita Garibaldi a Nervi, see the interesting displays at Galata Museo del Mare, and enjoy breathtaking views from Spianata Castelletto.

Green Bay, USA to Genoa is an approximately 15-hour flight. You can also do a combination of flight and train; or do a combination of bus and flight. The time zone changes from Central Standard Time to Central European Time, which is usually a 7 hour difference. Expect somewhat warmer weather when traveling from Green Bay in March: highs in Genoa hover around 59°F, while lows dip to 47°F. Finish your sightseeing early on the 23rd (Mon) to allow enough time to take a train to Cinque Terre.
more less

Things to do in Genoa 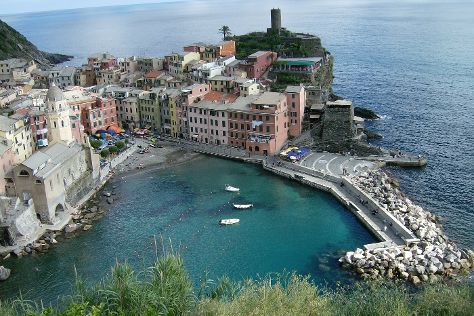 Made up of five picturesque towns on the Ligurian coast, Cinque Terre is Italy's answer to the French Riviera.

Cinque Terre is known for trails, shopping, historic sites, wildlife, and nature. Your plan includes some of its best attractions: trek along Footpath Monterosso - Vernazza, step into the grandiose world of Castello Doria, explore the wealth of natural beauty at Parco Nazionale Cinque Terre, and get great views at Bar Terza Terra.

To see maps, more things to do, other places to visit, and other tourist information, you can read our Cinque Terre planning website .

You can take a train from Genoa to Cinque Terre in 1.5 hours. Alternatively, you can drive; or take a bus. Traveling from Genoa in March, you can expect nighttime temperatures to be slightly colder in Cinque Terre, with lows of 42°F. Finish your sightseeing early on the 26th (Thu) to allow enough time to ride a ferry to Porto Venere.
more less

Things to do in Cinque Terre 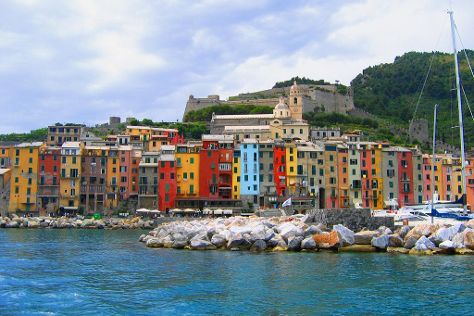 ©
Kick off your visit on the 27th (Fri): identify plant and animal life at Isola Palmaria, take in the architecture and atmosphere at San Pietro Church, and then take a stroll through Portovenere.

You can ride a ferry from Cinque Terre to Porto Venere in 1.5 hours. Another option is to drive. In March, plan for daily highs up to 60°F, and evening lows to 42°F. Wrap up your sightseeing on the 27th (Fri) to allow time to drive to Alassio.
more less

Things to do in Porto Venere

©
Alassio is a town and comune in the province of Savona situated in the western coast of Liguria, Northern Italy, approximately 80km from the French border.Alassio is known for its natural and scenic views. Start off your visit on the 28th (Sat): explore the world behind art at Museo Diocesano e Battistero Paleocristiano, take in the spiritual surroundings of Cattedrale di San Michele Arcangelo, explore the landscape on two wheels at Pista Ciclabile Area 24 - Sanremo, then make a trip to Muretto di Alassio, and finally get to know the fascinating history of Budello di Alassio.

For where to stay, other places to visit, photos, and more tourist information, read Alassio trip itinerary planning tool .

Drive from Porto Venere to Alassio in 3 hours. Alternatively, you can do a combination of bus and train; or take a bus. In March in Alassio, expect temperatures between 58°F during the day and 47°F at night. You will have some time to spend on the 29th (Sun) before leaving for home.
more less

Things to do in Alassio