London is known for museums, nightlife, historic sites, shopping, and parks. Your plan includes some of its best attractions: enjoy breathtaking views from Coca-Cola London Eye, get a new perspective on nature at Natural History Museum, don't miss a visit to Buckingham Palace, and admire the masterpieces at National Gallery.

Pittsburgh, USA to London is an approximately 12.5-hour flight. Due to the time zone difference, you'll lose 5 hours traveling from Pittsburgh to London. Prepare for somewhat warmer weather when traveling from Pittsburgh in December: high temperatures in London hover around 50°F and lows are around 39°F. Wrap up your sightseeing on the 30th (Mon) to allow time to travel to Kochi (Cochin).
more less 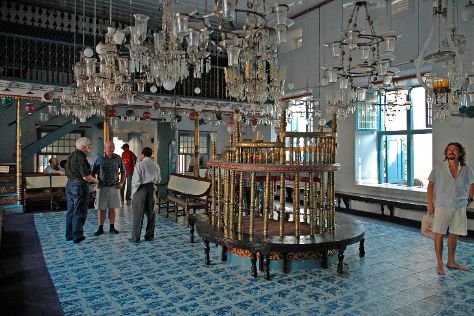 Queen of the Arabian Sea

A flourishing port city and magnet for the spice trade since the 15th century, Kochi (Cochin) proudly bears its distinct international influence and local Keralan culture.

Venture out of the city with trips to Kumaranalloor (in Kottayam), St Thomas Syro-Malabar Catholic Church ,Kokkamangalam (in Cherthala) and Marari Beach (in Mararikulam). The adventure continues: contemplate in the serene atmosphere at Paradesi Synagogue, take in the architecture and atmosphere at Karingachira Church, don't miss a visit to Chinese Fishing Nets, and have some family-friendly fun at Plug And Play Gaming Lounge.

To see maps, where to stay, and tourist information, go to the Kochi (Cochin) online journey planner .

Things to do in Kochi (Cochin)

Centered on an artificial lake, Thekkady provides a sanctuary to a diverse set of animals and plant species.

Thekkady is known for wildlife, nature, nightlife, parks, and spas. Your plan includes some of its best attractions: identify plant and animal life at Periyar Tiger Reserve, look and learn at Green land spice garden, examine the collection at Angadipetty -Kerala Ayurveda Museum, and get your game on at Thekkady Rose Park.

For where to stay, more things to do, reviews, and more tourist information, use the Thekkady tour itinerary app .

You can drive from Kochi (Cochin) to Thekkady in 4.5 hours. Alternatively, you can take a bus. Finish up your sightseeing early on the 6th (Mon) so you can travel to Jaipur.
more less

Things to do in Thekkady

Jaipur is known for historic sites, museums, shopping, childrens museums, and wildlife. Your plan includes some of its best attractions: step into the grandiose world of Amber Palace, identify plant and animal life at Elefunenjoy, don't miss a visit to City Palace of Jaipur, and get to know the resident critters at Deer Park, Ashok Vihar, Jaipur.

To see where to stay, reviews, photos, and tourist information, read our Jaipur trip planner .

Getting from Thekkady to Jaipur by combination of taxi and flight takes about 7.5 hours. Other options: do a combination of bus and flight; or drive. In January, daily temperatures in Jaipur can reach 73°F, while at night they dip to 47°F. Finish your sightseeing early on the 10th (Fri) so you can drive to Agra.
more less

Agra is known for historic sites, parks, shopping, museums, and nightlife. Your plan includes some of its best attractions: admire the landmark architecture of Taj Mahal, don't miss a visit to Tomb of Itimad-ud-Daulah, stop by Rajrani Souvenirs, and contemplate in the serene atmosphere at Bageshwarnath Temple.

To see ratings, where to stay, traveler tips, and other tourist information, go to the Agra trip itinerary builder site .

Getting from Jaipur to Agra by car takes about 3.5 hours. Other options: take a train; or take a bus. While traveling from Jaipur, expect slightly colder days and about the same nights in Agra, ranging from highs of 67°F to lows of 45°F. Wrap up your sightseeing on the 14th (Tue) to allow time to travel to New York City.
more less

New York City is known for museums, nightlife, shopping, historic sites, and parks. Your plan includes some of its best attractions: go for a walk through Central Park, admire the striking features of Grand Central Terminal, pause for some photo ops at 9/11 Memorial, and enjoy breathtaking views from Top of the Rock.